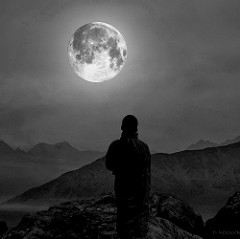 Triggers and thoughts derail me emotionally, even when I don’t recognize them. This week some old triggers popped up and suddenly I felt insecure and unsure of myself. My inner sense of stability waxes and wanes like the moon. Some days I am a big, bright, ball of enthusiasm and confidence and then something happens and I am a sliver of light far away peeking from behind the shadows. I can get thrown off center when I least expect it and by people or events that I don’t even consciously recognize as triggers. (God, I hope I’m not alone in this.)

A trigger is something that activates or elicits an emotional response, whether negative or positive. One of my triggers is interacting with introverts and by contrast feeling too big, bright or bouncy. I walk away questioning my extroverted personality and wondering how to crawl back into my shell and silence myself. For years I didn’t even realize what was happening or why, but this past week I was able to slow down the thought process and find some inner peace and start rewriting the scripts when a trigger came along.

Years ago I learned a technique that helps with slowing down the thought process when something happens and there is a shift in mood related to an event or circumstance. It’s an exercise designed to help me review what happened and why. I make three columns down a sheet of paper or journal page. The first is for the event, person, place or circumstance. The second column is for the emotion that resulted and how strong it is. The final column is for what I wish my response would be. Then once the issues are written down in black and white I can journal about exactly what went through my head between the inciting event and the feeling. After exploring that and rereading everything it’s time to tease apart where my thoughts go awry and drag me down and follow up with my desired adult response.

I auditioned to be on a game show. When I told my mom she voiced concerns that I would say something on television to embarrass her and my dad. I assured her I wouldn’t and left the conversation wondering why I instantly felt like my four year old self in a public place being told to keep my hands to myself and don’t make a sound. (I’m a 53 year old successful woman for goodness sake! which just adds to the shame.) I recalled the first time I was on a live television show, I was about 6 and the host jokingly called me a ‘ham’. At the time I thought he was saying I was fat, but found out soon afterward from the adults laughing on the sidelines that it meant I was a show-off. Until a few years ago I hadn’t realized the impact of that memory on my desires and dreams. I love being in front of people, teaching and making people laugh, but between my parents’ fear of embarrassment and being called a show-off on the air, there is little wonder I have squelched any desire to pursue public speaking. Anxiety haunts my attempts. Now, I know this isn’t the worst thing to happen to a young girl and may seem trivial to some, but for me it has influenced career choices and risks not taken. Imagine if those adults had seen something in that little girl to encourage to fully bloom and to be bold? That’s what I wrote about in my journal. What if? By slowing down the internal monologue based on past hurts that lead to self abasement and withdrawal I’m rewriting those scripts with new adult reactions. I am hopeful that the next time this particular trigger pops up I can recognize it quickly and counter the automatic thoughts with this new script leaving space for new emotions and bold actions.

Stuff I Talk About